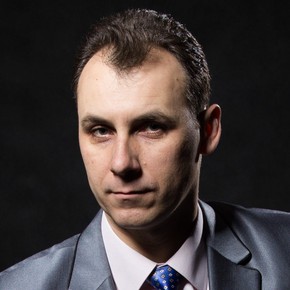 Dmitriy Barmakin was born in 1974 by the shore of the Black Sea, in Alushta (Crimea). At 10 years of age he lost his mother; his father raised him on his own. From childhood on he has had an inquiring mind; he swims well and loves to read. In eighth grade he bought a Bible with the money he had earned while on holiday. The practicality of Bible advice convinced Dmitriy that this ancient book is worthy of trust.

After graduating from vocational school, Dmitriy received a chef’s diploma. Later he finished courses in programming in Kaliningrad and worked as a programmer and operator of CNC machines. At work he has proved to be a responsible and honest worker, a man who is always ready to help.

Dmitriy met with his wife, Yelena, in Bakhchisaray in 2003. They got married three years after they met. Together they cared for Dmitriy’s sick father for several years, right up to his death. In 2017 the family moved to Vladivostok to assist Yelena’s parents and grandmother. Yelena’s work is creative, she is a photographer. Her passion for photography rubbed off on Dmitriy. In addition he successfully creates computer programs. The couple love to travel; they journeyed throughout Crimea and the Far East, photographing the sea, nature and animals. Throughout their years of marriage they made many true friends and good acquaintances.

On 28 July 2018 Dmitriy and Yelena were separated — Dmitriy was arrested for professing his faith, which in fact is a right guaranteed to everyone in Russia by the Constitution. For his wife this separation from her beloved husband is painful. Dmitriy’s detention is a real tragedy for Yelena’s relatives, since the couple has provided practical help to many of them, including her 93-year-old grandmother. They cannot understand why an honest and respectable man wound up behind bars.

Read full text in Russian
Номер уголовного дела:
11802050005000051
В чем подозревается:
according to the investigation, together with others he conducted religious services, which is interpreted as organising the activity of an extremist organisation (with reference to the decision of the Russian Supreme Court on the liquidation of all 396 registered organisations of Jehovah’s Witnesses)
Регион:
Primorye Territory
Номер дела в суде:
1-305/2021 (1-21/2020; 1-388/2019)
Расследует:
Investigative Department for the Pervorechenskiy District of the city of Vladivostok of the Investigative Directorate of the Investigative Committee of the Russian Federation for the Primorskiy Territory
Населенный пункт:
Vladivostok
Текущая стадия дела:
разбирательство в суде первой инстанции
Возбуждено:
27 July 2018
Рассматривает по существу:
Первореченский суд Владивостока
Судья:
Станислав Сальников